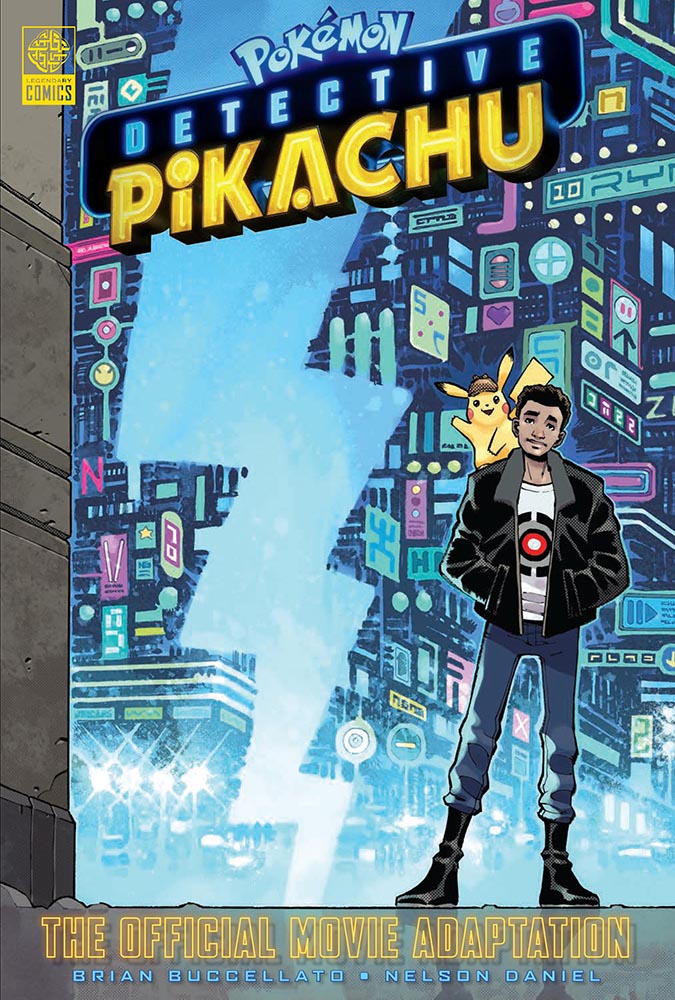 The graphic novel is written by Brian Buccellato with art by Nelson Dániel and draws inspiration from the film that is based on the beloved Pokémon brand—one of the world’s most popular, multi-generation entertainment properties and one of the most successful media franchises of all time. Readers are invited to follow along as lead character Tim Goodman, played in the movie by Justice Smith, journeys through Ryme City searching for his missing father. With twists and turns around every corner, nothing is more twist-y than Tim’s unexpected partner: a Pikachu with a penchant for coffee and danger, and the amazing ability to speak human language. In a city where humans and Pokémon live together in harmony, unexpected dangers surround them as they try to solve a mystery.

“Brian’s writing and Nelson’s art have really captured a depth to the world in which Detective Pikachu and his fellow Pokémon live,” said Robert Napton, Senior Vice President of Legendary Comics.  “We are so excited to expand upon this story, as well as the characters of POKÉMON Detective Pikachu.”

Brian Buccellato is a New York Times best-selling writer best-known for his work on Flash and Injustice for DC Comics. Brian started in comics as a colorist for the Marvel/DC crossover Punisher/Batman and went on to color for all the major publishers, including work on The Uncanny X-Men, Superman and The Flash. He began writing as part of The Story Company, where he collaborated on a number of screenplays. Buccellato started his comic writing career at Top Cow with The Darkness before teaming with Francis Manapul to co-write The Flash and Detective Comics at DC. He is the creator of Foster, Sons of the Devil and co-creator of Cannibal for Image Comics. His most recent work includes Lowlifes from IDW and Lost in Space: Countdown to Danger for Legendary. He currently lives in West Hollywood with a very small cat and dog.

Nelson Dániel has worked for over 15 years in films and commercials as an art director, production designer, storyboard and concepts artist for films like Eli Roth’s Aftershock and Green Inferno, as well as Robert Rodriguez’s Machete, among others. Nelson lives in Chile, where he has published the graphic novel, Lucca.  His latest graphic novels, 1899 and 1959 , are now available. He also did all art and colors on The Cape: 1969, the monthly series Judge Dredd, Dungeons and Dragons, Clue, and the Stephen King/Joe Hill collaboration, Road Rage, in addition to the single issues of Ghostbusters, GI Joe, Teenage Mutant Ninja Turtles, and more. He has also worked as colorist for Marvel and IDW on series such as The Cape, Wild Blue Yonder and the 2015 Eisner Award-winning best limited series, Little Nemo: Return to Slumberland, where he was also nominated for best colorist.

Legendary Comics was born out of a passion for mythic entertainment, seeking out new talent and working with the best and the brightest in the industry to create transportive worlds, inspirational characters, and spectacular adventures that leap off the page. Founded in 2011, Legendary Comics has produced an exciting catalogue of original titles that continues to grow and evolve. From partnerships with industry legend Frank Miller to Grant Morrison’s Eisner-nominated Annihilator, Legendary Comics has a passion for innovative new stories, including the fantasy graphic novel The Heart Hunter, the historical fiction story Championess (based on the true story of Elizabeth Wilkinson) and Jessica Chobot and Erika Lewis’ hit webseries, Firebrand: The Initiation of Natali Presano. In addition to original titles, Legendary Comics also expands the scope of the cinematic universes of its parent company Legendary Entertainment, by bringing big-screen adventure exploding onto the comic book page. Working with the visionary filmmakers and the architects of Legendary’s Monsterverse, they have delivered the level of quality and authenticity our fans demand with New York Times best-sellers such as Godzilla: Aftershock, Pacific Rim: Aftermath, and Skull Island: The Birth of Kong, to name a few. http://www.legendary.com/comics.

The Pokémon Company International, a subsidiary of The Pokémon Company in Japan, manages the property outside of Asia and is responsible for brand management, licensing and marketing, the Pokémon Trading Card Game, the animated TV series, home entertainment, and the official Pokémon website. Pokémon was launched in Japan in 1996 and today is one of the most popular children’s entertainment properties in the world. For more information, visit www.pokemon.com.