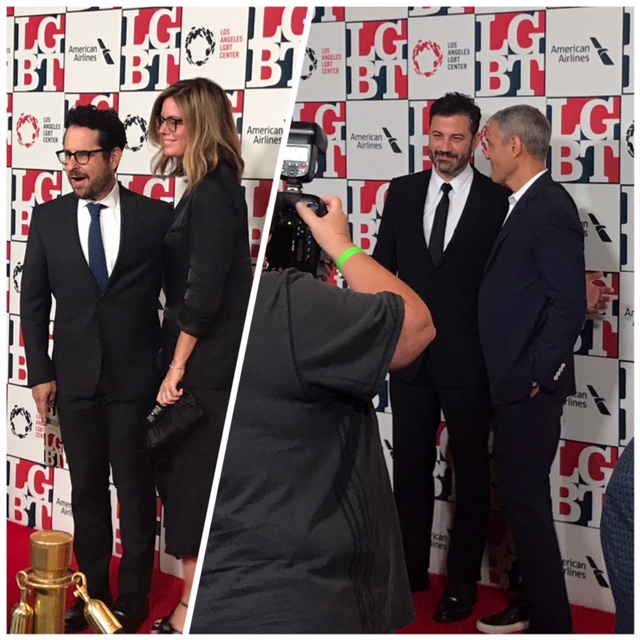 Bionic Buzz® got to cover the red carpet of the Vanguard Awards. The Los Angeles LGBT Center’s 48th Anniversary Gala Vanguard Awards will brough together more than 1,000 leaders from the civic, corporate, entertainment, and philanthropic communities to celebrate the inspirational 2017 honorees for their unwavering support of the LGBT community and their dedication to creating positive change in the world. Check out our video interviews below along with official post press release. Videos produced by Jackie Lewis. By @SteveSievers

Interview with actor Jordan Doww from The Commute & Fameless.

The Los Angeles LGBT Center honored Co-CEO of WME | IMG Ariel Emanuel, and former Senior Advisor to President Obama, Valerie Jarrett, at their 48th Anniversary Gala Vanguard Awards, which took place on Saturday, September 23 at the Beverly Hilton. This year’s star-studded, Hollywood-meets-the-Beltway evening, brought to you by American Airlines, united more than 1,000 leaders from the civic, corporate, entertainment, and philanthropic communities to celebrate the inspirational 2017 honorees for their unwavering support of the LGBT community and their dedication to creating positive change in the world. Guests enjoyed cocktails, dinner, and entertainment, along with a not-to-be-missed silent auction that included high-end items, packages, and experiences.

Host Jimmy Kimmel was greeted by thunderous applause when he stepped onstage to kick off the evening’s program. He introduced MSNBC’s Lawrence O’Donnell, who took a moment to reflect on the current political climate, and to commend Kimmel for his bravery in using his voice to create positive change. LA Galaxy soccer player Robbie Rogers introduced the Center’s CEO Lorri L. Jean, who captivated the audience with her powerful message about the importance of fighting for the change you want to see, noting that “change happens because we make it happen.”

Auctioneer Andrea Fiuczynski led the silent auction that had guests bidding on items such as a VIP Vegas Experience complete with concert tickets and a meet and greet with Cher, which sold for $24,000, and a New York Tennis Package with two tickets to the 2018 U.S. Open and an exclusive meet and greet with Billie Jean King, which went for $30,000. Actor and comedian Jermaine Fowler helped to raffle off a special European River Cruise from Uniworld, along with 400,000 American Airlines Advantage Miles.

Writer and producer Shonda Rhimes presented former Senior Advisor to President Obama Valerie Jarrett with the Rand Schrader Distinguished Achievement Award. Rhimes listed the many advancements that Jarrett fought for throughout her career, and spoke about the incredible impact she has had on creating positive change in her fight for equality. Jarrett joined Rhimes onstage to accept the award with a powerful speech, driving home the important message that “love really does trump hate.”

Artist Mark Bradford took the stage to present Co-CEO of WME | IMG Ariel Emanuel with the Vanguard Award, praising the many ways in which he has demonstrated his support for the cause and been able to make a difference. Emanuel accepted the award from Bradford with a moving speech about his cousin Gary who passed away from an AIDS-related illness. Emanuel said he wanted to use this award and his platform to honor Gary’s memory by telling the stories of those in the LGBT community.

For the latest event news and information, follow @lalgbtcenter on social media and join the conversation using #VanguardAwards.