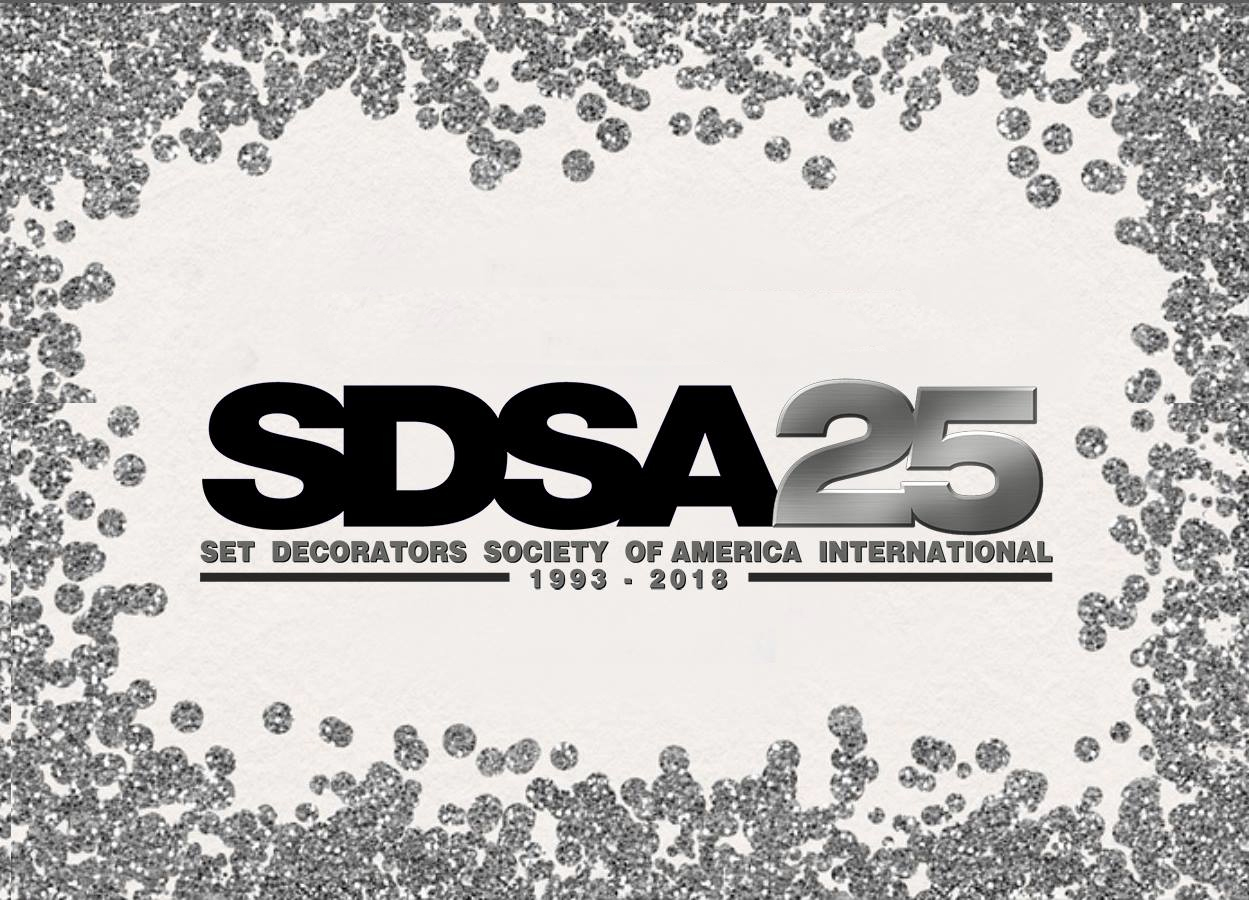 SDSA: 25 Years of Making Sets on the Silver Screen look like Gold

So rarely these days do people actually think about the work put into what’s going on behind every scene; each background, be it bedroom, basement or ballroom, is precisely calculated, even when it comes down to the seemly insignificant pile of clothes by the bed, or the band poster on the wall, every set decorator is telling the story of some of our most beloved characters and granting deeper insight on them in ways you might not have realized. The SDSA (Set Decorators Society of America) has been helping not only to improve and sustain the expectations of quality everyone has for film and television, but to advocate and allow others with similar passions for the media to collaborate and grow.

“The mission of the Set Decorators Society of America is to promote the highest standards of excellence in the field worldwide, and to entertain, inspire, teach and preserve the legacy of set decoration in motion pictures and television.” – SET DECORATORS SOCIETY OF AMERICA MISSION STATEMENT.

It shouldn’t surprise anyone that an organization called the Set Decorators Society of America knows how to make a party look classy. Celebrating their 25th anniversary at the Sheraton Hotel in Hollywood universal, anyone would be hard pressed to find a more perfect location for the upper class look and feel the SDSA presented. Already covered wall to wall in white gilded decor, the Sheraton is the epitome of class and elegance to begin with; Paired with the added blue and white decorations to complement the existing interior design only multiplies the effect of the already beautiful ballroom. The white roses decorating the event trellis and the crystalline colored balloons to match the golden and crystal chandeliers were absolutely breathtaking.

The members of the SDSA are all people with a great love for movies, shows and the craft of making each scene backdrop have its own personality. Whether their passion for media started their journey or they stumbled into it on the way, you can tell each and every person here really cares for the industry as a whole. Bionic Buzz had the honor of getting to interview quite a few individuals and hear their stories of where they started, be it the humble beginnings of SDSA President April Glover or the active imagination of the Executive Director Gene Cane, you can really tell how truly dedicated to the growth and inspiration all of them are in this artistry.

Set decoration is more than just making a scene look pretty, it’s telling a tale of the inner working mind and feelings of the character’s we see and the world they live in, all without words needing to be said or the characters even needing to be present. Decorator’s often need to thoroughly read through the script and even ask the writer’s what a character thinks and feels beyond anything originally intended to be shown. With them we have the privilege of added depth to everything we watch; in a simple glance of a room they’re able to express sides of a character we may not often see, how they spend their free time, what kinds of habits they have when they get to just be themselves or how they feel about where they are in life. They’re able to show us character’s hidden happiness, secret sadness or even just what kind of taste they have in music; no matter what it is though they’re always digging into the mythos and lore of each universe to better represent and immerse everyone who watches.

The SDSA used this opportunity of their 25th anniversary celebration to acknowledge several of their members and founders, even giving out major awards such as the Earl Cooperman Lifetime Achievement and Vision awards. First up to receive a major award was Marc E. Meyer.

Not long after his rise in popularity in the floral industry, Marc E. Meyer’s was offered the chance to to help with the flowers on set in the film CHINATOWN and became an approved member of the IATSE Local 44 with help from Set Decorator Ruby Levitt. While working at Universal Studios Meyer’s went from working with Gus Caselli in the flower room to becoming leadman for Set Decorator’s such as Bob Freer and Jerry Adams, all of which was accomplished by Meyer’s great work ethic, quick-wit and skill. Often you would see him staying long after the rest of the crew would leave to make sure everything on set was perfect. After eventually becoming a Set Decorator himself on the tv show SWITCH, he used a possibility he saw in the show to incorporate Martex, the linen company to provide the frequently needed towels for the set. His achievements did not end there however, he went on to create Faux Books and eventually establishing the Faux Library in 2002 to confront the problems of the struggling prop crews on set’s everywhere. Attending to the event with his dog Sophie, you could never meet a kinder, more hardworking or genuine man.

If you’re looking to find dedicated to the greater good and betterment of society look no farther than Bonnie Bruckheimer; Mrs. Bruckheimer has been hard at work, never stopping to open the way for future generations and break down the established walls that you think might stop you from fulfilling your dream. Bonnie has been a producer on several acclaimed films and television shows, such as DIVINE SECRETS OF THE YA-YA SISTERHOOD, STELLA, GYPSY, BEACHES, and a personal childhood favorite of mine HOCUS POCUS. In 1985 along with Margaret Jennings and Bette Midler she formed the company, All Girl Productions, in hopes and apparent success of crushing the “All Boys Club” in the industry. Bonnie is a someone always looking forward to the future and encouraging you to do the same,since 2011 she has taught “Woman in the Industry: Career Choices and Challenges” at USC School of Cinematic Arts, a widely popular class, yet still finds the time as a grief counselor for orphaned teens while being so highly in demand.

It’s without a doubt that both of these individuals worked hard to earn everything they’ve accomplished today and have both immensely helped the future of trade and the people in it in many different ways.

The Set Decorators Society of America has had a very successful and achievement filled 25 years so far, all of its members are filled to the brim with creativity and passion and they will never stop continuing to keep the field open for fresh minds and full hearts, they also know how to throw a pretty good party. Here’s to hoping we get 25 more years of fantastic work and innovation from the SDSA, then 50 more after that.

Interview with April Glover. She has been a set decorator on The IMDb Show, The Female Brian, & more. Has worked in the art department on Extreme Makeover: Home Edition, Murder & more.

Interview with Cheryal Kearne. She has been a set decorator for some iconic movies such as Poltergeist, Coming to America, Encino Man, The Adam’s Family, & more.

Interview with Cloudia Rebar. She has been a set decorator for some iconic movies such as Vanilla Sky, Escape from New York, Over the Top, 24 & more.

Interview with Peter M. Gurski & Peter Ayala. Peter Gurski has worked as a set decorator on Will & Grace, Fuller House, The Class, Hit the Floor Up All Night, The Ellen Show & more. Peter Ayala has worked in the art department on Will & Grace, Murder in the Firsgt, No Ordinary Family, Terminator: The Sarah Connor Chronicles, Las Vegas, Muppets Tonight & more.

Interview with Marc E Meyer. He is a recipient of the lifetime achievement award that evening. He has been set decorator on Street Hawk, The Nude Bomb, Xanadu, Model Inc, Dr. Strange TV movie & more.

Interview with David Smith. He worked in the art department on Guardians of the Galaxy, Gone Girl & more. He has also been a set decorator on American Reunion, The Holiday, Last Holiday, NYPD Blue, L.A. Law. As the World Turns & more.

Interview with Robert L. Zilliox. He has been set decorator on The Rockford Files, Quantum Leap, The Twilight Zone, JAG & more.

Interview with Philip A Hoffman & Shirley Starks. Philip has been a production designer for the Reality Television Awards, One Night Stand Up and more. Shirley has been a set decorator on Kevin from Work, Jericho, Crossing Jordan and more.

Interview with Michelle Harding Hollie. She has been a set decorator on Friday, V.I.P. & more.

Interview with Gene Cane. He has been a set decorator on Sunset Beat, Eerie, Indiana & more.

Interview with Harvey Schwartz owner of 20th Century Props. It has been a go-to in the Industry for years. They currently focus on 20th Century Design – Iconic Furniture and Lighting, but like any prop house that’s been in business for a while we’ve quite the collection of oddities as well!

Interview with Daphne Benavides who is the co-founder of Enchanted Studio Props LLC. Which is a copyright cleared art rental/sales gallery located in Burbank, CA. Formed in 2012 in New Mexico’s ‘Land of Enchantment’ by Dave and Daphne Benavides, Enchanted cleared art strives to provide opportunities and exposure for local artists. Enchanted serves the needs of Los Angeles Film and Television industry with hundreds of pieces of cleared fine art and photography for rent/sale.

Interview with Tami Glenn Cooper President of Hollywood International Placements, Inc. She got her start in product placement working for another organization, but she quickly discovered that her talents were better suited to establishing her own business. She is proud to have established this boutique agency that is fully female owned and operated. Over the years, she has established many personal relationships with big names in the entertainment industry, and she hopes you will join her extensive network of satisfied clients.

Interview with Sheba Khodadad founder of 6 Degrees Deep. Which is is a strategic blend of consulting, marketing, PR, branding, event production and management company. We work with traditional and non-traditional marketing methods to augment branding our clients’ talents, products or services. 6 Degrees Deep works with individuals, companies and non-profit organizations, dedicated to encouraging the formation, growth and success of people and businesses.

Interview with Alexndria Panuccio who is a recipient of The Leslie Frankenheimer Scholarship Award.

Interview with Najee Wilson who is a volunteer for the SDSA and a student at Hollywood Cinema Production Resources.

Interview with Diego Vielman who is a recipient of The Leslie Frankenheimer Scholarship Award.